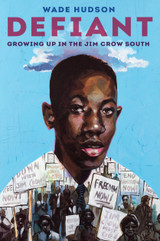 SKU:
Defiant: Growing Up In The Jim Crow South

Wade Hudson came of age against the backdrop of the civil rights movement. From their home on Mary Street, his close-knit family watched as the country grappled with desegregation, as the Klan targeted the Sixteenth Street Baptist Church in Birmingham, Alabama, and as systemic racism struck both across the nation and in their hometown.
Amidst it all, Wade was growing up. Getting into scuffles in the schoolyard, playing baseball on a team he put together, immersing himself in his church community, and starting to write. Most importantly, Wade learned how to find his voice and use it. From his family, his community, and his fellow college classmates, Wade learned the importance of fighting for change by confronting the laws and customs that marginalized and demeaned people.
This powerful memoir reveals the struggles, joys, love, and ongoing resilience that it took to grow up Black in segregated America. And the lessons that carry over to our fight for a better future.

Hudson enlightens young readers about his civil rights–era experiences that set the foundation for a lifelong commitment to fighting for justice. Alongside his wife and business partner, Cheryl Willis Hudson, Hudson has been on a celebrated run delivering diverse texts for young readers. This memoir provides witness to the formative experiences that shaped him, beginning in Mansfield, Louisiana, one of many “small rural towns across the South that White people controlled virtually unimpeded,” where the Black community demonstrated how “creative, resilient, dedicated, tough, and loving they were.” Readers follow his journey through school, honing his writing skills and being mentored by great teachers. In a world rife with segregation and unequal resources, Hudson excels with his community’s support, becoming the first in his family to attend college. This is the mid-1960s, and his are eyes set on role models like trailblazer Thurgood Marshall. He’s transformed by the Black literature of Langston Hughes, Richard Wright, Ralph Ellison, Margaret Walker, and others and present to heed the call of rising student activism. Readers will be awed by what it means to find one’s purpose during a metamorphic time in history and contribute to progressive social change—then bring it all back home to those who set you flowing in the first place. Strong storytelling and significant cultural references shine throughout. This will be a powerful read alongside the contemporary, award-winning texts that the Hudsons have nurtured. Powerful testimony from a children’s literature legend. (historical notes, sources, timeline) (Memoir. 10-14)

“The author, publisher, and civil rights activist spent his formative years in Mansfield, Louisiana. Nicknamed Brother, Hudson was introduced to leadership at an early age as he began to organize baseball teams, plays, and other projects. The adults in his life saw this natural ability and began to encourage him to hone these skills. While his life was filled with family, faith, and love, Hudson was slowly becoming aware of the injustices inflicted on his community. He noticed the ways Jim Crow laws impacted the lives of his friends and family and wondered why. His desire for progress led him to create the civil rights organization S.O.U.L (Society for Opportunity, Unity, and Leadership). The organization and the police’s response to it would lead Hudson to a life of activism. This memoir offers a snapshot of a community enriched by love and chained by systemic racism. VERDICT A great pick for public and school libraries looking for firsthand accounts of the effects of Jim Crow on young people.” –

SKU:
Defiant: Growing Up In The Jim Crow South

$10.99
We Rise, We Resist, We Raise Our Voices Paperback  (Signed copies available.  When you place your order. please indicate to whom you would like the book autographed. There is an Order...
Add to Basket
Add to Basket
Just Us Black History/Non-Fiction

$16.99
In the stunning follow-up to The Talk: Conversations About Race, Love & Truth, award-winning Black authors and artists come together to create a moving anthology collection celebrating...
Add to Basket
Add to Basket

$10.99
In the stunning follow-up to The Talk: Conversations About Race, Love & Truth, award-winning Black authors and artists come together to create a moving anthology collection...
Add to Basket
Add to Basket